+
Contact Us
Login
Sonny Merryman Inc. > About > Our Founder, Sonny 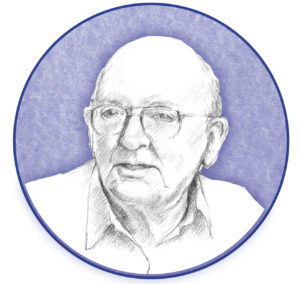 Floyd Withers “Sonny” Merryman, Jr. was born July 23, 1924 in Rustburg, Virginia.  He was the eldest child of Floyd and Margaret Muldowney Merryman. Other than for time spent at college and for a few years while working in Roanoke in the early 50s, the tiny village of Rustburg would always be the geographic epicenter of Sonny’s life and career.  In addition to his parents, Sonny was predeceased by his brother Tom, and sister Ann Merryman Evans.

It was his very special Aunt Aileen who gave young Floyd the nickname that would come to identify a remarkable man and his incredible life’s journey. She began calling him Sonny not because he was the oldest son or even because he was a Junior – but rather because the boy possessed and displayed such a bright and sunny disposition.

From a young age Sonny eagerly sought out work and entrepreneurial opportunities. He delivered newspapers, milk, eggs, and groceries and performed any number of tasks and errands that would turn a buck or two. During the depths of the Great Depression when many men worked for only a dollar a day, a teenager in Rustburg was already way ahead in the money making game.  Sonny embraced the principals of hard work, fairness, ethical conduct and ingenuity – traits he would possess his entire life.

After graduating from Rustburg High School in 1942, Sonny followed in his father’s footsteps and matriculated to VPI to pursue a degree in Animal Husbandry. Sonny joined the Virginia Tech Corps of Cadets and served as a member of the Highty-Tighties Regimental Band.

As World War II raged on in Europe and the Pacific, Sonny decided rather than wait to be drafted he would go ahead and volunteer to serve his country. Poor eyesight kept him from enlisting right away. He was instructed to stand ready because eventually he would be called to service. He decided to return to Rustburg; an education at Virginia Tech would have to wait. The war eventually ended without Sonny being called to duty. When it came time to return to Blacksburg however Sonny was just too busy perfecting his skills and mastering the craft that would bring him immense notoriety – the art of the deal. He would have already began in earnest a career of a businessman that would eventually earn him acknowledgement as one of Central Virginia’s most successful and respected citizens. Despite never completing his college degree, Sonny would never forget his beloved university. During the next six decades he would become one of Virginia Tech’s most loyal supporters and generous benefactors. In 2006 in recognition of his lifetime of exemplary service and outstanding leadership to Virginia Tech, Sonny’s alma mater presented him with the Ruffner Medal – the highest individual honor bestowed by the university.

The end of war signaled new commercial opportunities for aspiring entrepreneurs. Sonny seized the moment in time to take advantage of the post-war building boom to establish his first bona fide enterprise – Rustburg Block Company. The business was a local manufacturer of cinder blocks and provider of septic tank installation services. The company thrived. Around 1953, Sonny’s father became ill and asked Sonny to relocate to Roanoke to assist him in his business as a sales representative for Smith-Moore Body Company – a statewide dealer of mostly trailers, dump bodies and specialized transportation equipment.  At Smith – Moore Sonny would also receive introduction and sales experience to a product that would become synonymous with the Merryman name – the school bus.  Sonny liked to joke that his career had been one of turning “yellow into green.”  In 2002 Sonny was recognized by the Virginia Association of Pupil Transportation for a lifetime of contributions to public education and promoting school bus safety by being inducted into the organization’s Hall of Fame. Sonny is the only dealer principal to be so honored by the state school bus association.

About the same time Sonny was getting started in his equipment sales career, he made the biggest and most significant deal of his life when he met and married a young nurse from Pittsylvania County – Frances “Lou” Taylor. The couple would have two children Alice Patricia (Pat) born in 1954 and Floyd, III born in 1958. Lou was much more to Sonny than his wife and mother of his children. She was his trusted confidant and business partner. It has never been truer that beside every successful man stands a dedicated, supportive and patient spouse. In 1991, while fighting a successful battle against colon cancer, Sonny was blessed with the apple of his eye – the birth of his only grandchild – Marshall Lee.

Through the late 50’s and early to mid-60s, Sonny continued working in trailer and school bus sales – while farming, curing hams and wheelin’ and dealin’ in his spare time. Then in 1967 he caught his big break. Thomas Built Buses of High Point, NC was looking for a new Virginia dealer. Based on his reputation as a relentless but respected and knowledgeable bus sales professional, the company chose Sonny and Sonny Merryman, Inc. was born. Five decades later the company is widely regarded as one of the largest and most successful bus dealerships in America. Today, the company boasts four statewide locations – including its Central Virginia corporate headquarters and employs nearly 200 workers.

Perhaps as much as his business success, Sonny was just as well known for his philanthropic contributions. Through endowments and charitable trust, he continues to provide scholarships to students across the Commonwealth. Sonny never forgot the value of an education. He actively encouraged young people to pursue higher education opportunities. Sonny is personally responsible for assisting hundreds of aspiring scholars to receive their college degrees by providing more than $1M in college scholarships and financial aid. In addition to his keen interest and investment in education, Sonny also supported numerous community and civic organizations.

Sonny passed away on December 7, 2013. His endearing spirit lives on throughout his company, the Virginia bus community, and the many organizations and causes he generously supported.