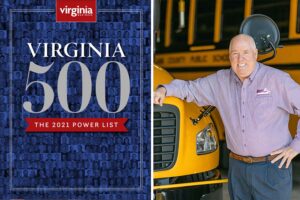 Sonny Merryman Executive Chairman, Floyd Merryman has been named to the Virginia Business’s annual Virginia 500 – 2021/22 Power List for the 2nd consecutive year. Among the list are the state’s most influential leaders in business, government, politics, and education.

Read what Virginia Business had to say about Merryman:

Merryman has been with the firm his father created for more than 40 years.

In 1967, Floyd W. “Sonny” Merryman Jr. founded Sonny Merryman Inc. as a small bus and trailer sales business operating out of Rustburg. Since then, it has grown to be one of the state’s largest bus dealers, with four locations and hundreds of employees.

The company works with several industries, although they are best known as a school bus dealer.

The Merryman clan has deep roots at Virginia Tech. Floyd Merryman III was a 1981 graduate of the university, and his father graduated in 1946. The family has given millions back to the school over the years, and in 2019, they donated $2 million to be split evenly between the school’s athletic program and the Pamplin College of Business’ Global Business and Analytics Complex, which will open in 2024.

In December 2020, Merryman announced that the company would be expanding its Campbell County location to add an electric bus charging facility.

Merryman transitioned to the role of Executive Chairman this July, announcing that former Thomas Built Buses President and CEO Caley Edgerly would become his company’s new president and CEO.