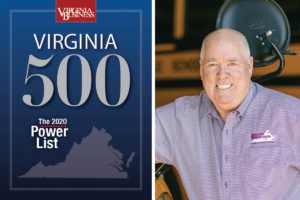 Virginia Business’s annual Virginia 500 – The 2020 Power List was recently released on August 29, 2020. Sonny Merryman’s President & CEO, Floyd Merryman, was ranked among the list of Virginia’s top business leaders. Virginia Business had this to say about Merryman:

It may have been difficult to imagine buses running on anything but gasoline or diesel fuel when Merryman’s late father, Sonny, opened a Thomas Built Buses dealership in 1967.

But the 53-year-old company stepped into the electric bus business last year, landing a contract from Dominion Energy Virginia for the first phase of an electric school bus rollout to Virginia schools, the largest such deployment in the country.

In May, Merryman accepted the 2019 Dealer of the Year award from Thomas Built Buses in a surprise visit from the company’s president. Merryman has been with his family’s business going on 40 years, since his graduation from Virginia Tech’s Pamplin College of Business.

He and his family members are longtime donors there, with the Merryman Athletic Facility bearing their name. They fund several scholarships and support the Virginia Tech Corps of Cadets. In 2019, they committed $2 million to be split between Pamplin and the athletic program. Merryman also serves on the GO Virginia Region 2 Council, which makes recommendations on regional projects to receive state economic development grants.