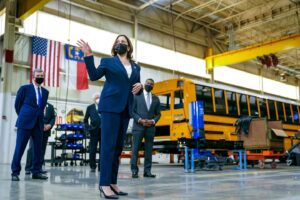 DTNA also marked the inauguration of its “Electric Island” charging site in Portland, Oregon, and the continuation of the Freightliner Electric Roadshow, according to a news release from the vehicle manufacturer.

During Vice President Harris’s visit to the High Point, North Carolina-based plant on Monday, she met with John O’Leary, president and CEO of DTNA, as well as several TBB employees, who outlined the benefits of electric buses and demonstrated the technology behind commercial electric vehicle manufacturing.

“Welcoming Vice President Harris to Thomas Built Buses was an honor and a privilege,” O’Leary said in the news release. “It’s exciting to see our electric vehicles recognized by the administration, and to have her visit take place the same week we inaugurate the first public electric vehicle charging station specifically designed for commercial vehicles, and as we continued showcasing the all-electric Freightliner eCascadia and eM2 for customers with our innovative roadshow.”

TBB’s Saf-T-Liner C2 Jouley runs tailpipe-emissions free and noise-pollution free and has a 135-mile operating range according to the school bus manufacturer. With nearly 50 Jouleys already delivered, school districts across the country, from Alaska to Virginia, have already incorporated electric school buses in their daily operations.

The same week and a day before Earth Day, according to DTNA, Electric Island, the first of its kind charging station specifically designed with medium- and heavy-duty vehicles in mind and open to the public, celebrated its grand opening.

Available to electric commercial vehicles and passenger cars, the station is the first one that is aligned to the blueprint of the West Coast Clean Transit Corridor Initiative. The grand opening event featured TBB’s Jouley, an electric city bus, and Freightliner’s eCascadia and eM2.

In addition to the nearly 40 trucks in the hands of customers through the Freightliner Electric Innovation and Customer Experience Fleets, which have thus far accumulated more than 750,000 miles of real-world use, both a Freightliner eM2 and an eCascadia are currently making their way down the West Coast to give customers from Seattle to Los Angeles an opportunity to see and experience the new electric trucks, according to DTNA.

Freightliner recently opened ordering for the eCascadia and eM2 which will begin production in late 2022. At the start of series production, the eCascadia will feature a 250-mile range and max gross combined weight) of 82,000 pounds.